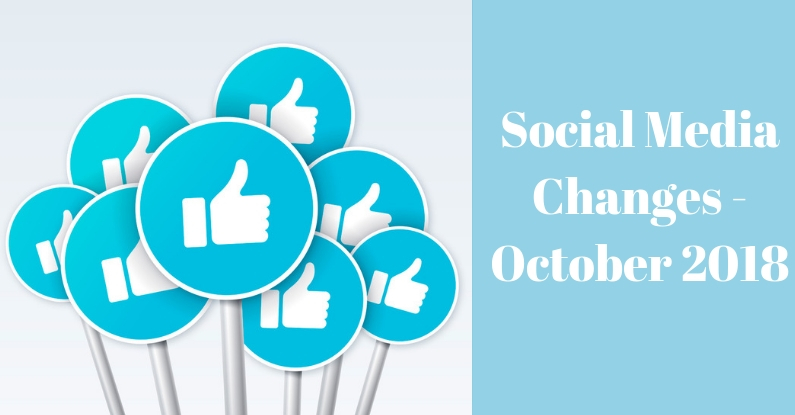 Things are constantly changing in the social media world. It can be hard to keep up with all of the latest features and policy changes, so we’ve made it easy for you to stay up to date by creating a monthly roundup of what’s new on Facebook, LinkedIn, Instagram, and Twitter.

This month, Facebook rolled out a fresh, new version of Messenger, while LinkedIn switched up its algorithm to level its post-distribution playing field. Meanwhile, Instagram introduced a new way for you to quickly follow people you meet in real life, and Twitter dropped hints that they might do away with the ‘like’ button.

Read on for more noteworthy social media changes that happened in October 2018.

Facebook’s Messenger has a new look! In October, Facebook started to roll out a new, simplified version of the app, called Messenger 4. The new version features a minimalistic look and contains new tabs to hold your conversations and your friends list, along with a place to discover businesses, deals, games, and more.

In other news, Facebook is said to be testing a new “unsend” button for Messenger—something we’ve all probably needed at some point. I know I have!

Now, you can place advertisements partway through videos and buy advertisements that you’ll only have to pay for once they’ve been watched for at least 15 seconds. You can now also advertise in Facebook stories.

Lately, Facebook has been taking action against low-quality ads. These are advertisements that include clickbait, direct users to “unexpected content,” create bad experiences for users, or don’t align with Facebook’s goal to create “meaningful connections between people and businesses.”

As of October, Facebook is unapproving and reducing the distribution of ads featuring:

In October, LinkedIn updated its algorithm in an effort to create more engagement for more users—rather than just on posts by top content creators. The new algorithm has changed the way LinkedIn distributes posts by estimating “how much a user will value a feedback from a viewer,” to help diversify the feed without impacting top creators.

Instagram introduced a new feature this month called ‘Nametag.’ This feature is similar to a QR code because it allows you to quickly add followers to your account by showing  people the username on your phone for them to scan. You can also customize your nametag with additional designs, colors, and stickers. The nametag feature can be accessed through the menu button on the top-right section of your profile.

If you enjoy video chatting with your friends over Instagram, you’re in luck! This past month, the platform extended their group video chat capabilities by upping the number of people you can chat with at once from four to six people. Time to get talking!

Over the past few months, Twitter has been testing new features to enhance conversations on their platform. Among those features are  threaded replies, which introduces a ‘reply’ field to every tweet and highlighting replies by the original poster in a different color.

Rumors also started swirling this month around the future of Twitter’s ‘like’ button. The rumors started after Founder and CEO Jack Dorsey said he is planning to get rid of the feature, which

Twitter later stated is not in their immediate plans, saying:

“As we’ve been saying for a while, we are rethinking everything about the service to ensure we are incentivizing healthy conversation, that includes the like button. We are in the early stages of the work and have no plans to share right now.”

Would you be sad to say goodbye to Twitter’s like button?

That’s it for now! We’ll be back next month with more social media updates. In the meantime, you can find our full Social Media Changes Report for October 2018 on AdvisorU.