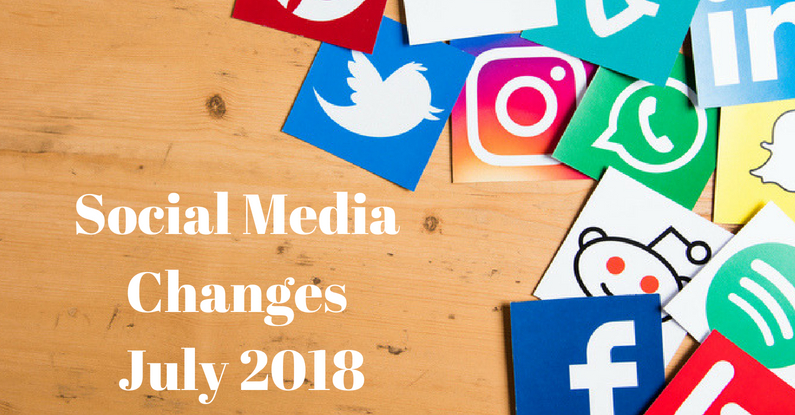 When it comes to the social media world, things are constantly changing. It can be hard to keep up with all of the latest features and policy changes, so we’ve made it easy for you to stay up to date by creating a monthly roundup of what’s new on Facebook, LinkedIn, Instagram, and Twitter.

Read on to learn about the changes that launched in July 2018.

This month, Facebook introduced a brand-new feature called “Watch Party” that lets you watch videos with your friends in real time. You can now create Watch Parties in Facebook Groups, where you can curate your own playlist of videos for your friends to watch and comment on at the same time. As of now, Watch Parties are only available in Facebook Groups, but will likely be expanded to other parts of Facebook in the future

If you’re not up to date on your favorite TV shows and have to strategically dodge spoilers on the internet, Facebook now has your back! The platform introduced a new “keyword snooze” feature this month, allowing users to temporarily hide posts containing specific keywords. To use the feature, just click on the three little dots on the top right-hand corner of a Facebook Post containing the keyword you’d like to hit “snooze” on, and any further posts containing that keyword will be hidden from your News Feed for 30 days. For people like me who are always behind on their TV shows, this one’s a life saver.

In an effort to increase transparency surrounding Facebook advertisements, the platform will now offer more information about advertisers to its users. In July, Facebook added a new “View Ads” tool that lets you see a list of all active ad campaigns, even if the ads are not political in nature.

On a related note, Facebook is testing new label that will now appear on branded posts. The label’s purpose is to provide details about the arrangement between paid partnerships and the branded posts (i.e. publishers) that represent them.

Do you have a Facebook addiction? Facebook is now working to help curb addictions to its platform by introducing a new  “Your Time on Facebook” feature, which shows how much time you’ve spent on the site during the past seven days. You can even set a time limit and the feature will alert you once you’ve spent a certain amount of time on Facebook. This feature is only on Android at the moment.

LinkedIn recently added QR codes (or “LinkedIn Codes”) to each profile, giving you a new way to expand your network. Now you can add connections by scanning other people’s QR codes using the mobile LinkedIn app, emailing them your code, sending it through other apps, or by putting the code on your business cards for people to scan.

LinkedIn also did a little revamping of their desktop version of the site in July. You can now do the following:

For those who run multiple campaigns on LinkedIn, the site has revamped its Campaign Manager to provide a “more intuitive experience” to marketers running multiple campaigns. The Manager now features breakdowns of campaign data and personalization options (for example, you can customize it to display the metrics you review most often), and there’s also a new navigation structure to allow you to switch between accounts and campaigns more quickly. The search feature has also been updated, and now data from a specific campaign can be found by searching the campaign name, ID, or ad format.

If sharing photos and videos, posting live stories, or messaging on Instagram isn’t enough for you, you can now video chat with up to three other people through the app’s new Video Chat feature. The feature can be reached through Direct Messaging by using the camera icon, and you can also minimize your video chat and browse through the app while still talking to your friends.

You’re All Caught Up

While Instagram hasn’t brought back chronological timelines, they have tried to make it easier for users to keep track of what they’ve already seen by introducing a new “You’re All Caught Up” feature. The new feature will will now tell you once when you’ve seen all of the latest posts from the past two days, eliminating any uncertainty over what you’ve seen and what you haven’t.

There are also a couple few new features that have been added to enhance Instagram Stories. You can now do the following:

In an effort to reduce bots and trolls, Twitter now requires new users to confirm an email address or phone number to register for an account. Twitter has also been suspending more than one million accounts per day to decrease the spread of disinformation.  As well, Twitter is no longer counting accounts as followers if they have been locked because of suspected fraud. Because of this, you may see your follower counts take a dip.

Check back next month to see more of the what’s new on social media. In the meantime, you can find our full social media changes report over on AdviserU.