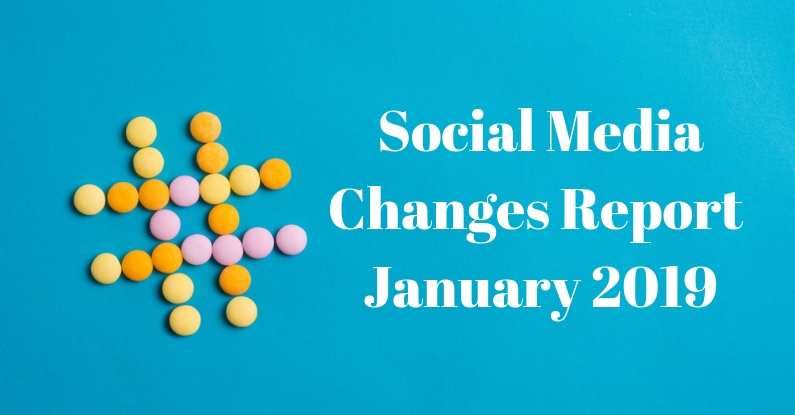 Things are constantly changing in the social media world. It can be hard to keep up with all of the latest features and policy changes, so we’ve made it easy for you to stay up to date by creating a monthly roundup of what’s new on Facebook, LinkedIn, Instagram, and Twitter.

This month, Facebook changed the way that Group memberships work, while LinkedIn started sprucing up their advertising tools. Meanwhile, a new Instagram record was set and Twitter started rolling out their new look to all.

Read on for more noteworthy social media changes that happened in January 2019.

It’s now easier than ever to get socially responsible on Facebook! To help mobilize users around shared causes, Facebook has launched a new feature called “Community Actions.” Through Community Actions, you can create and support petitions, tag relevant government agencies and officials, discuss your cause with other supporters, and create relevant events and fundraisers. You can find this feature under “fundraisers” in the sidebar of your News Feed.

Soon, you’ll be able to message people on Facebook, WhatsApp, and Instagram, all without needing to have an account on each platform! Facebook CEO, Mark Zuckerberg, confirmed this month that Facebook is looking to merge their three messaging platforms in the future—but the change most likely won’t happen until 2020.

Say goodbye to the days of being automatically added to Groups you’re not that into! Facebook has changed the way that inviting new members to Groups works, now requiring new members to accept an invitation before becoming a member. Before, if a member were to invite their friends to a Group, their friends would automatically be added as members, regardless of whether they were actually interested in joining. This resulted in a bunch of inactive members in members, so as of January 2019, Facebook is moving all inactive members who’ve never visited a Group to a new “invited” section. So watch out admins—you may see a big drop in your membership numbers.

Adding to their recent re-launch of Company Pages, LinkedIn introduced a  few new features this month. Company Pages now feature a “People” tab that showcases employees and how to contact them, and it will also feature employees’ location, their educational background, and their job function and skills. Under the “communities” section on Company Pages, users can also now discover hashtags that are relevant to companies. Also, Company Pages will include “relevant funding and investor information,” so users can become more informed about companies.

LinkedIn is continuing to expand their advertising tools—woohoo! The social media platform is said to be working on an upcoming “‘lookalike audiences” feature, which will allow users to create target audiences similar to their current customers. Also in the works is the more specific targeting, where advertisers will be able to target users based on their professional requirements and interests.

While it’s not yet possible to re-post other people’s posts, Instagram is now letting users post to multiple accounts at once. The platform introduced a  new “regram” feature this month, through which users can post simultaneously to different accounts using the same composer screen rather than logging into each account separately.

A new record was set this month for the most-liked photo on Instagram—and in case you haven’t heard, the record-breaking photo was of . . . an egg. The photo was posted from the account @world_record_egg on January 4 and has since garnered over 52 million likes. The previous record was held by Kylie Jenner, whose photo announcing her daughter’s name in February 2018 raked in 18.1 million likes. The Internet sure is something, huh?

After testing it over the past few months, Twitter officially announced their new look in January. The redesign will roll out soon and introduce new features like an emoji button, quick keyboard shortcuts, upgraded trends, advanced search, and more. Other features to come include the ability to easily switch between accounts, faster load times, and the ability to crop photos before tweeting them.

A new https://t.co/fHiPXozBdO is coming.

Some of you got an opt-in to try it now. Check out the emoji button, quick keyboard shortcuts, upgraded trends, advanced search, and more. Let us know your thoughts! pic.twitter.com/G8gWvdHnzB

That’s it for now! We’ll be back next month with more social media updates. In the meantime, you can find our full Social Media Changes Report for January 2019 on AdvisorU.