4 Reasons Building Trust is Harder (and more important) Than Ever 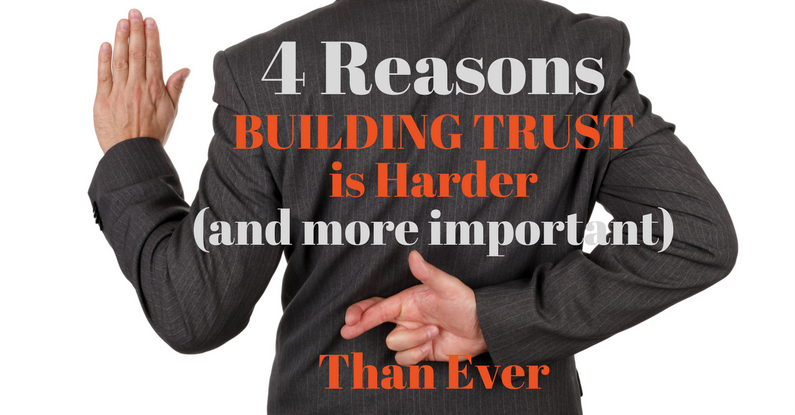 People, including your clients and your prospects, are barraged with an onslaught of misinformation every day.  Having a message that resonates (your Brand) and providing evidence that you are who you say you are, is essential.

SHOUTING doesn’t work anymore.  Nor do unbelievable too good to be true claims.  People are skeptical of most any claim from an unknown entity.

Here are 4 examples of current events that bolster those feelings

People are gravitating more and more towards mobile and online sources for their news.  They scan the headlines quickly and land on a few pieces that pique their interest.

Fake news is so prevalent that there was actually a recent experiment to try and acclimatize people so they could recognize when news, was likely real or not.1  The process was similar to the vaccination process where small amounts of a virus are injected to help the body build up a resistance.  In the Fake News Vaccine experiment, people were subjected to both fake news and contradictory real news in various combinations.  The results of the experiment aren’t relevant here.  What is relevant though is that Fake News is so prevalent that this experiment was even necessary in the first place.  (the real and fake news in this experiment was geared to climate change – see footnote if you are interested in the details)

A survey conducted by Dimensional Research states that 90% of customers are influenced by online reviews.2

The problem is that there is also a widespread skepticism about these reviews.3

Fake reviews are left by the business itself or its connections.  They can also be paid-for reviews, or reviews left by ex-employees or competitors that don’t accurately reflect the business experience.

Fake reviews are a problem as they entrench the cynicism of the reader.  Can they really believe what they are reading?

First a disclaimer:  This is not a political article, it is simply an exercise in outlining why people no longer immediately believe what they read.

Kelly Anne Conway, a political pundit, is credited for starting the Alternative Facts revolution when she said: “Sean Spicer, our press secretary gave… alternative facts to that.”

That wasn’t the first time facts or statistics have been manipulated to serve the cause or the message. That has been an ongoing occurrence since word-of-mouth became a means of communication.  It was however a historical moment where the general public were advised flat out that Facts can be manipulated.

Alternative Facts are just another reason why people now think twice about the validity or credibility of what they read.

The problem is that, in many cases, the top 10 – 20 results are littered with websites that are owned, operated and maintained by the {whatever} suppliers.  It’s often tough to spot what the real comparison sites are.  Often the suppliers rate or rank or tag their products as marginally better, than the competitors’ in order to create a semblance of a true comparison.

All this really boils down to is people, once again, not knowing whether or not to trust what they are reading.

The first question you might be asking yourself is whether or not you really need a “Solution”.

The answer is absolutely, unequivocally, and without question: YES, you need a solution.

The bottom line is that your clients and prospects are increasingly skeptical of almost everything they see and read.  You need to “prove” your brand more than ever before.  The days when you could simply say “I place my client’s interests first” are gone – likely forever.

Regardless of the DOL fiduciary rules – people just don’t believe it anymore.

Even as you look around at other financial advisors, your competitors, you are likely experiencing some who claim to be fiduciaries, yet they continue to promote and sell products that provide them some sort of incentive – or even revenue.  If you don’t believe it, why would prospects that don’t know you?

If you intend on growing your practice, it has become an absolute must that you have client and prospect facing resources that “demonstrate” and “prove” you are who you say you are and that you believe in and deliver what you say you will deliver.

Once you have a solid and compelling brand, your number two objective should be to build credibility and trust. 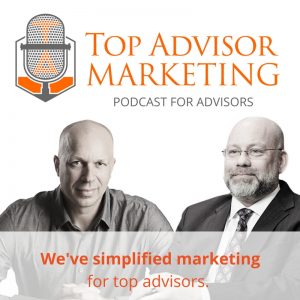